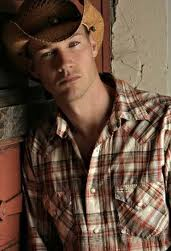 If you follow me on Twitter, read my blog, or know me personally you already know that I love to watch Steve Byers act.  I first watched him as John on Syfy's "Alphas" and have since watched everything he's been in that I can get my hands on.  Well, everything but the really scary stuff because non-scifi horror gives me nightmares. And if you haven't seen star him yet in the science fiction/horror film, "Static," (also known as "Glitch") you should be sure to check it out next time it airs.

Anyway, Steve's a blast to watch on screen and it didn't take me long to discover he's also an unbelievably funny and nice guy. (Photo at right is taken from his IMDB page.)
I've read a lot of interviews of Steve, but being a naturally curious person, I still had more questions.  A lot more in fact.  He's generous enough to have taken the time to let me interview him.  Below you'll see what he has to say to questions that I hope he hasn't been asked a lot, if ever, in previous interviews.


Christina Williams:  If you could have any fantasy/mythological creature as a pet, what would it be and why?
Steve Byers:  Dragon because...well Dragons.
CW:  Is it correct that “Game of Thrones” is your favorite television show, and if so, what is it that you love about it?
SB:  Did I mention the Dragons?
CW:  What are your hobbies?
SB:  I wish I could say grooming my Dragons but alas no. If I ever have free time (usually once kids are asleep) I like to spend it on my Playstation 3. Escapism.
CW:  I'm sensing a trend here... Who are your all-time favorite actress and actor, alive or deceased, and would you please elaborate?
SB:  Gary Oldman. The guy is like a chameleon. A talented and human looking chameleon.
CW:  What is your dream vehicle?
SB:  Okay, I'm beating a dead horse here but would a Dragon be okay? Worst case, I hate traffic so maybe a helicopter?
CW:  Would you tell us about your pets?
SB:  Used to have two cats. They both passed this past year. Taking a break from pets for awhile..
CW:  I'm sorry to hear about your cats.  Losing pets is hard.  If I could make a pet dragon appear, I'd certainly send you one for Christmas.  My oldest kid is very literal and for the longest time, since the dragon books are located in the mythology section of the library and are therefore classified as "non-fiction," he was convinced that dragons existed here and now and that if he looked hard enough in the forest around here he'd find one.  If he does, I'll be sure to let you know.
On a different note, where is your ideal locale to film a movie, and have you ever filmed there before?
SB:  I love shooting in Toronto as it's where most of my family is. Going home at the end of the end of the day makes the job more "normal". Don't get me wrong...I've never shot in a tropical location and I think Daddy likey.
CW:  I’ve read before that you love beer and burgers.  What’s your favorite kind of beer?
SB:  I like trying new craft beers. I'm not a stout fan though. I like a Rolling Rock or Sleeman Cream Ale.
CW:  Do you have a favorite ethic food and what is it?
SB:  Love authentic Mexican food. All of it. Gimme some.
CW:  You’ve said before that you love to play video games and that “Skyrim” is your current favorite.  What do you like about it?
SB:  Oh, I don't know...ummm Dragons? I love that it does not restrict you on how you play the game. Not a linear storyline. I hate rules.
CW:  I’ve found you to be a very funny guy on Twitter, yet you generally play serious roles. Is this intentional? Do you have plans to do comedy in the future?
SB:  Comedy is a very specific art and I'm just a wise-ass.  If I ever have the opportunity to play a another comedic part and it seems right, for sure!
CW:  If you had access to the Tardis, Dr. Who’s time-traveling spaceship, when and where would you go?
SB:  I'd probably go back to last week when I forgot to pay my phone bill.
CW:  Is it hard for you to sit back and relax when you watch television or movies without analyzing what’s going on since you work in the industry?
SB:  Like most people in our business (I think), it's hard to ignore glaringly bad elements of a production but if something is great, I love to get lost in it.
CW:  What’s your all-time favorite movie?
SB:  "Seven," "The Fifth Element," "Blade Runner," "True Romance."
CW:  What is the strangest, weirdest, most uncomfortable, funniest, or most memorable costume you’ve worn? 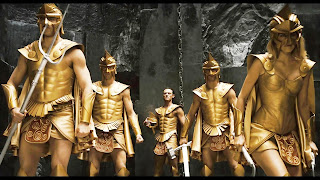 SB:  By far... Heracles in "Immortals". Most valuable (especially for it's size) and uncomfortable wardrobe I've worn.
(CW Commentary: Later on, I asked Steve which guy he was in this picture.  His reply, "Back left. In the skirt.)

CW: I’ve read that some actors shy away from watching their own shows. Do you enjoy watching programs you’ve been in and seeing how the final product turned out, or do you prefer not to watch yourself on screen?
SB:  NO. Sadly, no.
CW:  You’ve been married 12 years. How do you balance family life with filming schedules, which I would imagine cause long absences from home?
SB:  My wife does it all. Rock solid.
CW:  Does your wife have a favorite show she’s enjoyed watching you in?
SB:  "LA Complex"... she likes that genre.
CW:  Do you have kids?
SB:  Yup 2.
CW:  When you read bedtime stories to your kids, do you get into doing all kinds of crazy voices and stuff to make the characters come alive?  I have this vision of you as the ultimate story book reader :)
SB:  Sometimes.... depends on the energy stores. I also hate to work 'em up before sleeping....it happens pretty easily.
CW:  What’s your favorite book you’ve read to you kids recently?
SB:  "Lucky Duck"
CW:  Back in 2002 you were in “Slap Shot 2” in which you portrayed a hockey team member.  You’ve mentioned before that you did your own skating in the film.  Did you play hockey growing up?

SB:  I'm Canadian... so Yes. Loved it.
CW:  You and Nina Dobrev were great on screen together in “My Daughter’s Secret.” What’s Nina like to work with, and has there been any talk of casting you on “The Vampire Diaries?”  I, for one, would love to see how you look with a set of fangs :)
SB:  Thanks. We had a lot of fun. There have been a few roles that I've been considered for on the show. Ultimately, it hasn't worked out thus far. We'll see ;)
CW:  In “Falcon Beach” you played a very sweet wake boarder. You’ve mentioned to me before that some of the filming where you were so cheerfully jumping wakes behind the boat was done while it was snowing outside and you were, essentially, freezing.  Would you elaborate on what it’s like to work in such adverse conditions? Personally, I can’t imagine how you could even hold onto the rope if it was that cold much less look like you’re having fun doing so.

SB: It was certainly tough to work up the courage to get in the water on those days. They were very kind though and had a portable hot tub for us to jump in after those scenes. A couple people actually went to the hospital for treatment of hypothermia on that set. Scary stuff. That "acting like I was having fun" was just the acting part. 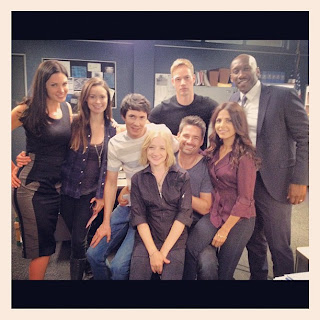 CW:  I loved watching you as John on Syfy’s “Alphas.” Do you have a favorite episode? (Note: "Alpha's" cast photo at right taken from summerglauwiki.com)

SB:  Loved running around with guns. Still a kid at heart.
CW:  Rachel, played by Azita Ghanizada, was your love interest in “Alphas.” What’s Azita like to work with?

SB:  Azita is great. She was very kind and wanted to make sure I felt at home coming into a show on it's second season.
CW:  Did anything particularly funny happen on the set of “Alphas?”

SB:  Not one thing in particular stands out but there were certainly lot's of laughs. Warren and I had a lot fun and were comrades in stupid jokes and buffoonery.
CW:  You’ve recently completed filming “Christmas Star,”  a Hallmark Channel Christmas movie which you star in. Is it a drama or comedy, and would you tell us a little about the movie?

SB:  It's a sweet film about a family struggling with the loss of a parent and the need to continue living life. A flame from his past sparks up and helps the family learn that life and love can go on.
CW:  What kind of character do you play in “Christmas Star?”

SB:  I play a Dad who is Basketball coach and a little disconnected with the real world. He's a little dorky... so there's a whole lotta "me" in this guy.

CW:  Was there anything particularly memorable or unusual that happened on set while filming “Christmas Star?”

SB:  It's always tricky to shoot winter movies in the summer. It is kinda surreal when they have the snow machines running in the middle of the night and everyone is in winter clothing and it's about 80 degrees out. Shannon and I had a great time all the same.
CW:  It seems like, since at least from an audience perspective, Hallmark movies don’t look like they rely much on special effects to make them good, that they would be more rewarding to work on from an actor’s perspective than a film which uses a lot of blue or green screens and CGI. Is that a correct assumption?

SB:  Just different really. I love it all.
CW:  Do you know when “Christmas Star” is set to air?

SB:  Not yet. I imagine around American Thanksgiving.

CW:  Any news on future films and television series fans can look forward to seeing you in?

SB:  There are a few irons in the fire right now but I don't want to give too much away until it's signed and sealed but stay tuned ;)
CW:  Are there any particular roles you’d like to play future?

SB: I love the fantasy and sci-fi genres so anything in that realm I'm game. Also would love to do an epic Western. Spaghetti or otherwise ;)

Thank you for all the support and my best wishes to you and all who might read this.

CW: Thanks for letting me interview you and for making me laugh so much!   :)
You can follow Steve on Twitter @TheSteveByers and look at his IMDB page.  To avoid any confusion based on my blog address and Twitter name, I should clarify that while I write paranormal/fantasy books, and I'd love to see Steve star in one, were it ever to become a movie, I'm (unfortunately) not associated with the writing of the "Immortals" movie Steve is in.  I chose my Twitter handle based on what was available that was related to the genre I write, and what sounded cool :)
Posted by Unknown at 8:39 AM